Since the time of Robert Roberts many Christadelphians follow a Bible reading chart where we may ponder events in our lives the light of what we have read.

7 June 1967: Jewish forces enter Jerusalem, beginning Jewish rule
There was heavier fighting between Israel and Jordan on the 7th June, Jews capturing the fortress of Latrun at daybreak. The Israeli Air Force destroyed the Jordanian reinforcements coming from Jericho to Jerusalem. Dayan worried that the UN would declare a ceasefire decided to capture Jerusalem using paratroopers who entered the Old City appropriately through the Lion’s Gate and who first captured the Western Wall and the Temple Mount. These Paratroopers fought the Jordanian defenders street-by-street and hand-to-hand so as to not damage the city. Thus note how the events that day were commented on that day in the Bible readings for the day,

Isaiah 31 “Woe to them that go down to Egypt for help; and stay on horses, and trust in chariots, because they are many; ….Now the Egyptians are men, and not God; and their horses flesh, and not spirit. When the LORD shall stretch out his hand, both he that helpeth shall fall, and he that is holpen shall fall down, and they all shall fail together.”(1-3)

Already at that time Egypt was shown to be weak, and Jordan who desired to “help” Egypt had its air force destroyed.

“For thus hath the LORD spoken unto me, Like as the lion and the young lion roaring on his prey,” it was the Lion gate the Jewish Paratroopers entered, “when a multitude of shepherds is called forth against him, he will not be afraid of their voice,” which was like the UN. Dayan was not afraid of the UN’s voice, “nor abase himself for the noise of them:”

First Israel knocked out Jordan’s air force, ” defending also he will deliver it;” when the air force removed the Jordanian reinforcements, “and passing over he will preserve it.”(4-5)
Air superiority allowed Israel to maintain their gains, and prevented damage to Jerusalem. The blessing of air superiority was established, when by miracle, Israel could destroy Egypt’s air force- on the ground.

“On the day of the liberation of the Western Wall and the Old City of Jerusalem, Israeli forces advanced southward along the Path of the Patriarchs toward the Etzion Bloc. They met no opposition after the Mar Elias monastery on the outskirts of Bethlehem. The Jordanian Army fled from the Judean Hills. The Jerusalem Brigade of the Israel Defense Forces entered the abandoned Jordanian army camp that had been constructed on the ruins of Kibbutz Kfar Etzion. Gush Etzion was liberated by the Israeli Army on June 7,1967. see here

Massu’ot Yitzhak (Isaac’s Beacons) the site of the proposed work was delivered the same day as Jerusalem due to air superiority, on the day we were reading about the deliverance of Jerusalem ‘like birds flying’.

Film made one month after the 1967 war by the late Dr. Martin Richter of Basel, Switzerland. The film, showing scenes of Jerusalem, Hebron, Bethlehem and other locations, was edited by his son, Alexander Avidan and recently posted on YouTube.

30 November 2012: UN PA vote and Israel as a result resumes plans for building in Jerusalem
From the BBC “Some 138 members of the assembly, including many EU states, Russia, China, India and Brazil voted in favour of recognising the Palestinians as a non-member observer state. Israel the US and seven other states, including Canada, Czechosolvakia, the Marshall Islands, Panama, Micronesia, Naru and Palau voted against the resolution. Forty-one nations including the UK and Germany abstained. “The General Assembly is called upon today to issue a birth certificate of the reality of the State of Palestine,” Mr Abbas told the assembly in New York shortly before the vote.”

From Yahoo JERUSALEM (Reuters) – Hours after the United Nations voted overwhelmingly to grant de-facto statehood to Palestine, Israel responded on Friday by announcing it was authorizing 3,000 new settler homes in the West Bank and East Jerusalem.

Obadiah 1 speaks of Esau, who being the brother of Jacob knew of the promises. See how events at the UN match the prophecy, as the PA rises up (as Edom did) when there is no substance.

The vision of Obadiah. Thus saith the Lord GOD concerning Edom; We have heard a rumour from the LORD, and an ambassador is sent among the heathen, “Arise ye, and let us rise up against her in battle.” (Obadiah 1:1)

The pride of thine heart hath deceived thee, thou that dwellest in the clefts of the rock, whose habitation is high; that saith in his heart, Who shall bring me down to the ground? Though thou exalt thyself as the eagle, and though thou set thy nest among the stars, thence will I bring thee down, saith the LORD. (Obadiah 1:3-4)

The PA, as an inheritor of Edom, being on the mountains of Israel has put its nest amoung the stars at the UN. With no land or other aspects of state, it is treated as a state (a star). Just as all the world hears, and Isarel reacts by building, the answer to the events at the UN is given.

Shall I not in that day, saith the LORD, even destroy the wise men out of Edom, and understanding out of the mount of Esau? And thy mighty men, O Teman, shall be dismayed, to the end that every one of the mount of Esau may be cut off by slaughter. For thy violence against thy brother Jacob shame shall cover thee, and thou shalt be cut off for ever. (Obadiah 1:8-10)
also here 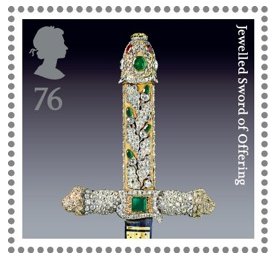 For us the sword is the word of God (Ephesians 6:17), and the ecclesia had made an offering on that basis. This would be remarkable enough, but the readings on the day the letter was sent featured Hosea’s short chapter,

The stamp shows a king’s sword, in effect, sent to the Ensign work, which is to encourage Jews, as they return to the land, to seek the LORD. These are the latter days. This is what the Royal Mail says about that stamp.
It is the only sword actually presented to the Sovereign during the Coronation (by the Archbishop of Canterbury, to signify that the royal power is at the service of the church).
To convert the terms: the Ecclesia gives a sword to the King (Christ) to signify the king’s power (Christ’s power) is at the service of the Ecclesia.

Curiously this picture is supported from the Bible,

For the LORD taketh pleasure in his people: he will beautify the meek with salvation. Let the saints be joyful in glory: let them sing aloud upon their beds. Let the high praises of God be in their mouth, and a twoedged sword in their hand ; (Psalm 149:4-6)
Wherefore take unto you the whole armour of God, that ye may be able to withstand in the evil day, and having done all, to stand. Stand therefore, having your loins girt about with truth, and having on the breastplate of righteousness; And your feet shod with the preparation of the gospel of peace; Above all, taking the shield of faith, wherewith ye shall be able to quench all the fiery darts of the wicked.
And take the helmet of salvation, and the sword of the Spirit , which is the word of God: Praying always with all prayer and supplication in the Spirit, and watching thereunto with all perseverance and supplication for all saints; (Ephesians 6:13-18)

The sword that was described in the hands of the saints, later in Revelation is shown as coming from the mouth of the king of kings,

And out of his mouth goeth a sharp sword, that with it he should smite the nations: and he shall rule them with a rod of iron: and he treadeth the winepress of the fierceness and wrath of Almighty God. (Rev 19:15)

We would all hope that throughout our lives that we do as Paul says we should, take the sword of the Word of God. Yet we know that nothing that is done by the ecclesia, with that sword of the Word of God, is in the Ecclesia’s power to do. The power belongs to the Great King.
At the coronation the sword is given to the king, but he in turn after being anointed and taking the vesture of the kingdom offers it on the altar (see 1 Cor 15:28).