The place name ‘Isaac’s Beacons’ reminds us that every year Jews keep a festival of light, from an era of darkness when there was no open vision. The word Hanukka is from the word חנך “to dedicate”.

The tradition of a festival dated from the time of the Temple re-dedication after the Temple had been defiled by Antiochus IV Epiphanes. But the celebration centres around the miracle of the oil for one day that lasted to give light for a full eight days until more oil could be pressed.

Though there was no open vision, there was miracle. We are reminded of the book of Esther of the time in Persia, how deliverance seemed natural, and how Jews prevailed over their enemies through circumstance.

The feast was kept by our Lord. As John records for us, he was in Jerusalem at the temple at that time,

And it was at Jerusalem the feast of the dedication, and it was winter. And Jesus walked in the temple in Solomon’s porch. Then came the Jews round about him, and said unto him, How long dost thou make us to doubt? If thou be the Christ, tell us plainly. (John 10:22-24)

I am the light of the world: he that follows me shall not walk in darkness, but shall have the light of life. (John 8:12)

Though the feast of Dedication was not divinely given as a command, if it was the case it must have met with approval.

This year Hanukkah (21st December) coincided with the daily readings in Zechariah 4 that speak of the two olive trees on each side of the golden seven branched lampstand. Zechariah asks what it signifies and is told,

Then he answered and spake unto me, saying, This is the word of the LORD unto Zerubbabel, saying, Not by might, nor by power, but by my spirit, saith the LORD of hosts. (Zec 4:6)

Things would be achieved with those giving ‘oil’ who loved Yahweh of Hosts.

At the time it was a message specifically for Zerubbabel who was encouraged that he, having laid the foundation, would finish building Yahweh’s house at Jerusalem. There was also a prophecy about the ‘headstone’ of the corner to which would be said “Grace unto it.”

But Zechariah asked further, ‘What are the 2 olive trees?’ and then ‘What be these 2 olive branches which empty oil out of themselves?’

These then are two witnesses that ‘stand by’ or ‘stand because of’ the Lord of the earth. Two witnesses establish truth (Deut 19:15). 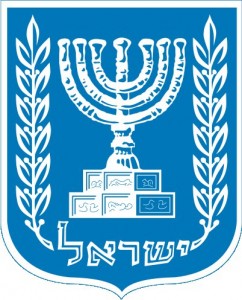 For the reason of this prophecy, and the role of the Lampstands in the Temple, the Lampstand have come to speak of things related to Messiah and redemption. An analysis of Israel’s symbol of the Lampstand and 2 Olive branches, used in stamps and on letterheads, notes,

“They served as symbols of the coming of Messiah and the rebuilding of the Temple in which the Menorah, along with other ritual objects would serve as a sacred sign of the restored splendour of Jerusalem.” Alec Meshori, In the light of the Menorah,The Israel Museum, p21

This time of Dedication to us seems to be a right time to begin the work as we read of building, and so the first donation for planning has been sent, of 10% of the final building work.

This entry was posted in Uncategorized. Bookmark the permalink.